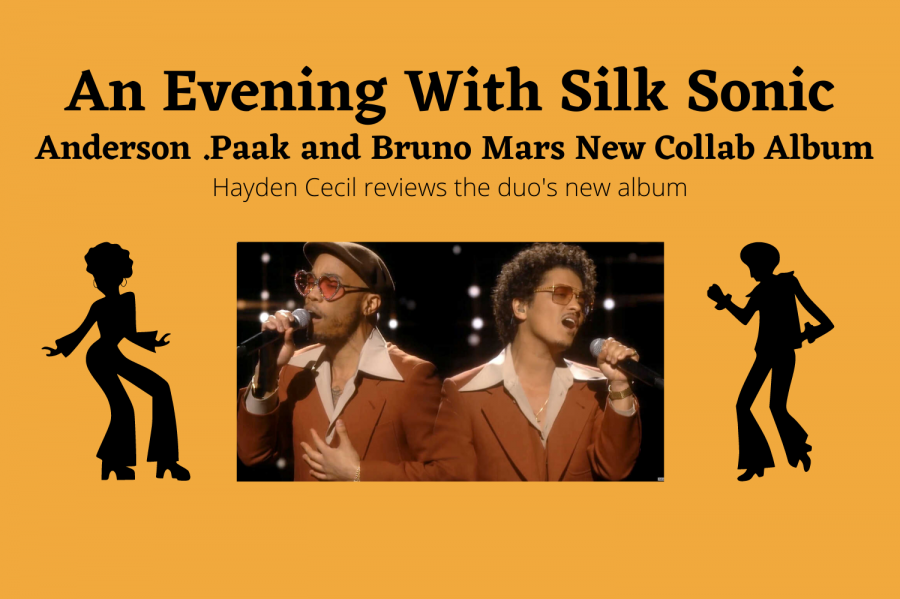 Bruno Mars and Anderson .Paak recently collaborated on the album An Evening with Silk Sonic. The duo goes by the name of Silk Sonic and released their album on  November 12, 2021.

With elements of soul, jazz and r&b, the nine-song album is a very nice listen. With a combination of 15 Grammys between the duo, they have a lot of talent and it shows.

Anderson .Paak’s latest album, Ventura, took home the 2020 Grammy for R&B album of the year and the song Lockdown won the 2021 Grammy for best melodic rap song. Bruno Mars has dominated the past decade as a certified hit maker but has been quiet for the past few years with his last project 24K Magic being released in 2016.

The album starts off with the lead single Leave The Door Open. The song is about how they will “leave the door open” for their significant other. I particularly like the second verse as .Paak is singing and Mars does the ad libs. It really does a good job of displaying the duo’s fantastic chemistry. Both .Paak and Mars keep you entertained throughout the course of the song.

The fourth track, After Last Night, featuring Thundercat and Bootsy Collins, has a great intro. Bootsy does a great job on the ad libs and really gives the song a nice jazzy feel. The bridge of the song is also very nice and perfectly leads up to the final chorus.

The fifth track, Smokin Out The Window, is my favorite. I really enjoy the production on this song as there are so many different sounds coming at you all at once and they all sound so cohesive.

The sixth track, Put On A Smile, completely shifts the theme of the album and is very vulnerable. Mars really shows his best vocal performance of the album on this song. The outro makes this song go from good to great.

The closing track, Blast Off, is a great way to end a great album. The psychedelic soul on this song is great. You can really hear ideas that Mars has had from his past album 24K Magic as it has a very similar feel. The outro to this song makes you want more and that’s what I love about it.

Overall I absolutely love this album. If 70s Motown made music today, this is exactly what it would sound like. While the artists don’t explore anything new, they don’t diminish on any prior sounds. The production is amazing, blending so many genres together flawlessly.

While I know who Anderson .Paak is, I don’t think he gets the love he deserves and hopefully this album will help with that. The album is short and to the point – all killer and no filler. I don’t think it’s a debate that almost all of Bruno Mars’ songs are hits, but with this album he really reinvents his sound and proves he can still make a hit.

My only complaints are that I wish that this album were released this summer. While I have no problem with short albums, I don’t like having so many songs released before the album comes out as four songs were released as singles. The song 777 brings down the album as it sounds like a song that would be in a movie or advertisement about a casino.

Overall, An Evening with Silk Sonic is a fantastic album with great replay value. I would love to see this duo release more work in the future. They really have a special connection and it shows throughout the album. I have this as one of the best albums this year and give it a 9/10.