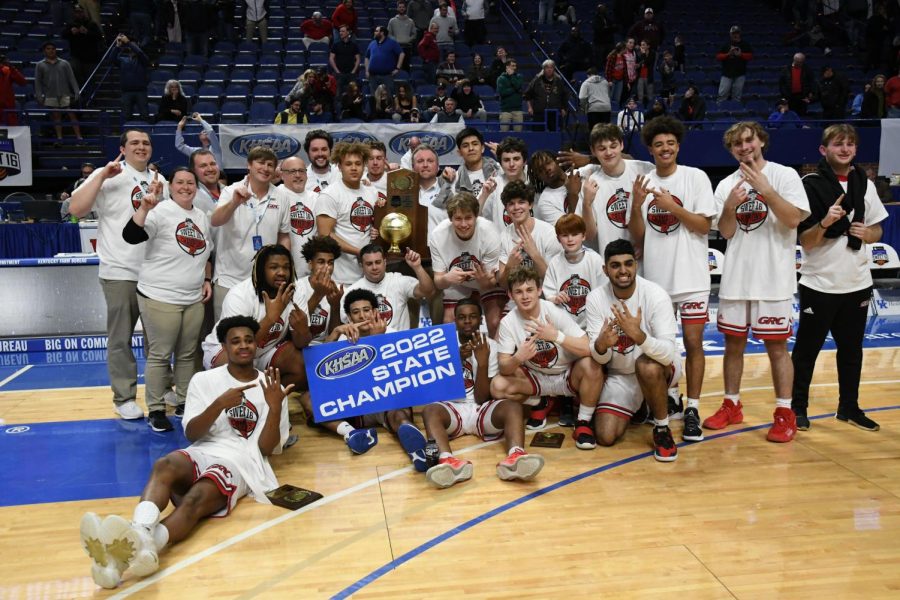 Your GRC Cardinals are the Kentucky Sweet 16 State Champions for the first time since 1951!

The Cards were able to knock off the Warren Central Dragons 43-42 last night and secure the championship win.

The Cards had a one-point lead going into the half and were able to extend it with a quick start.

After a Dragon timeout though, Warren Central went on a 10-0 run to end the quarter and take their first lead since the opening quarter, 34-31.

Coach Cook suddenly switched from man-to-man to a half -court trap to open up the final quarter, and it worked with the defense being able to force a few turnovers late.

“We tried to hold on to some of that,” Cook said. “We thought if we could hit them with it in the second half, then maybe they wouldn’t have as much time to adjust to it. We tried to hold on to as much man as we could early and then in the second half we were able to make some adjustments which I thought arguably might have been one of the biggest differences in the game.”

The Cardinals were able to regain the lead after senior Tanner Walton drilled a three from the corner to go up 39-36 late.

Leading 40-38 with just over a minute to go, senior guard Aden Slone found Edwards who was able to lay it in and draw the foul. He made the free throw to go up five with 1:10 left.

The Dragons made one last push though, hitting a three with 43 seconds left to cut the Cardinal lead to two.

After a Warren Central foul, the Cards missed the front end of a bonus allowing the Dragons to drive to the basket and draw a foul. Warren Central made the first free throw but missed the second and couldn’t hang on to the rebound, leading to the horn sounding and the Cards crowned State Champions.

Jerone Morton led the team in points with 14 going 6-12 from the field and was named the tournament MVP.

Walton finished with 13 points and 5 boards. “It means everything, this is a once in a lifetime experience,” Walton said at the postgame conference. “Every kid dreams of this – to grow up and play on this court not only to just play but win. It’s just amazing.”

The Clark County faithful made a huge impact on the game, providing the support the players needed when it mattered most.

After the game, Warren Central’s coach said he had wanted his players to attack the rim and was trying to communicate to them but it was so loud it was hard for them to hear.

Coach Cook was extremely happy with the way his team played through the tournament and especially last night.

“You gotta decide on what’s most important,” Cook said at the post-game presser. “Is it about you, or is it about us? These guys made the decision that it is about us. You have to sacrifice and if you sacrifice, in the end you’ll be rewarded and that’s why we’re state champions.”

The win gives the team, school, and community memories and moments that will last forever.

State titles don’t happen very often and this is an occasion that will go down in GRC athletics as one of, if not the greatest moment in GRC history.
Cameron Anderson’s State Championship Photo Gallery